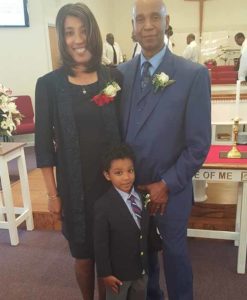 The Reverend John A. Smith Sr., the Pastor of the New Generation Church, was born in Williamsburg Va. where he was taught to love the LORD at a very young age by his loving parents Deacon Okie and Mrs. Rita Smith. Pastor Smith grew up on a dairy farm where he learned about hard work, dedication and a family that prays together will stay together. Pastor Smith received his calling to preach the gospel of Jesus Christ at the young age of 15. With boldness and admiration for the gospel, he would read and teach the bible during his lunch periods at Lafayette High school where he attended. Standing in the mist of his classmates, he declared the gospel of peace, reconciliation and that Jesus saves from sin. It did not matter to him when some came to only mock and make fun of him for carrying his bible and preaching to all who would have an ear to hear what the Spirit had to the say.

While still a teenager, Pastor Smith along with several of his older brothers preached and taught the word of God with conviction to those who were housed at the James City County Jail facility.

At the age of 19, Pastor Smith was in prayer and meditation with the Lord and asked God to show him what he would have for him to do. God then revealed unto him that he wanted him to go into the United States Marine Corps and be a witness for him. Pastor Smith did not understand why the Lord was leading him to a place where the preaching and teaching about how God saves from sin would not be well accepted and that this would be a most difficult mission, but he knew and trusted that if Jesus went with him he would go. It was there on that Island where God allowed him to be tested and tried and proved, to see if he could and would trust only in Him. While at Paris Island Pastor Smith was chosen to become the Lay Leader for his platoon, where he lead his fellow Marines in prayer and devotions. Many came to know the Lord not only through his teachings of God’s Word; but as well as his ability through the power of the Holy Ghost to withstand the cruel punishments that were placed upon him for his belief and his faith in God. 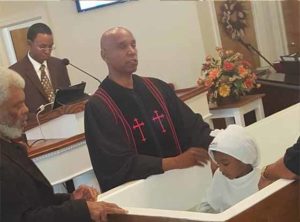 In the mid 1980’s, Pastor Smith along with one of his older brothers, established and organized a church in the Williamsburg area, where he was the assistant Pastor and served there faithfully until 1999. In 1999 he moved to Charles City VA., where he was led to a church that was just a few houses down from where he was now living. After visiting the Cedar Grove Baptist Church, he learned that they were without a Shepherd and he asked if he could help in any way. He was allowed to share the gospel of Christ to the Cedar Grove church community. God gave him a love for the people there and he later joined the church. For about three years he taught them the word of God through being a Sunday school and bible study teacher as well as preaching on many Sunday morning services.

After about three years there, God led him out of Cedar Grove Baptist Church where The New Generation came to birth along with community members who no longer wanted to sit under the teachings and doctrines of men; but wanted to be taught by the Holy Spirit of God. Since the birth of the New Generation, Pastor Smith continues to preach and teach how to have and live a life free from sin.

Pastor Smith worked for Dominion Virginia Power for 21 years and then took a job as a Vice president for a national janitorial company which led him to become the owner of his own company where he and his wife are partners.

Pastor Smith has always shown himself as a hard dedicated worker following the example of the Apostle Paul who worked with his own hands so that he might not be chargeable to any, but to be God’s free man. Pastor Smith has never asked or accepted a salary for preaching and teaching God’s word, but has performed his services willingly without charge. When work is needed to be done at the church, whether it’s painting, landscaping, cooking or serving those who come through the food line, Pastor Smith is there with a smile, showing those whom God has sent him to lead, to lead by example.

Pastor Smith is the loving and faithful husband to his wonderful and beautiful wife Robyn B. Smith and a loving father to his children, and to all those whom God has sent to him to teach how to get out of sin, that they might be presented before the throne of God without spot or wrinkle.